Our Brogad Pm Was a Delinquent Students' Loan Borrower 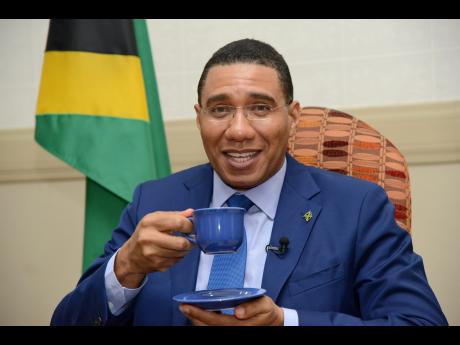 Recently a post about Prime Minister Andrew Holness went viral on social media and many are questioning the purpose of the post. Was it intended to embarrass him? Well, it had the opposite effect with many expressing their love and support and even relating to the most honorable brogad's struggles earlier on in his life.

The post highlighted the fact that Jamaica’s ninth prime minister was such a delinquent when he borrowed money for his studies at the University of the West Indies (UWI) to pursue a degree in the social sciences in the 1990s, that his name was published in the newspaper among the most delinquent borrowers who had defaulted on their loans. This is something that many would never want to have revealed but it is a common struggle for many. University is very expensive and a lot of students have to borrow to pay for their studies and sometimes upon leaving the institution many are not immediately hired in their dream job or they have to settle for a lower-paying job that cannot begin to cover their debt. 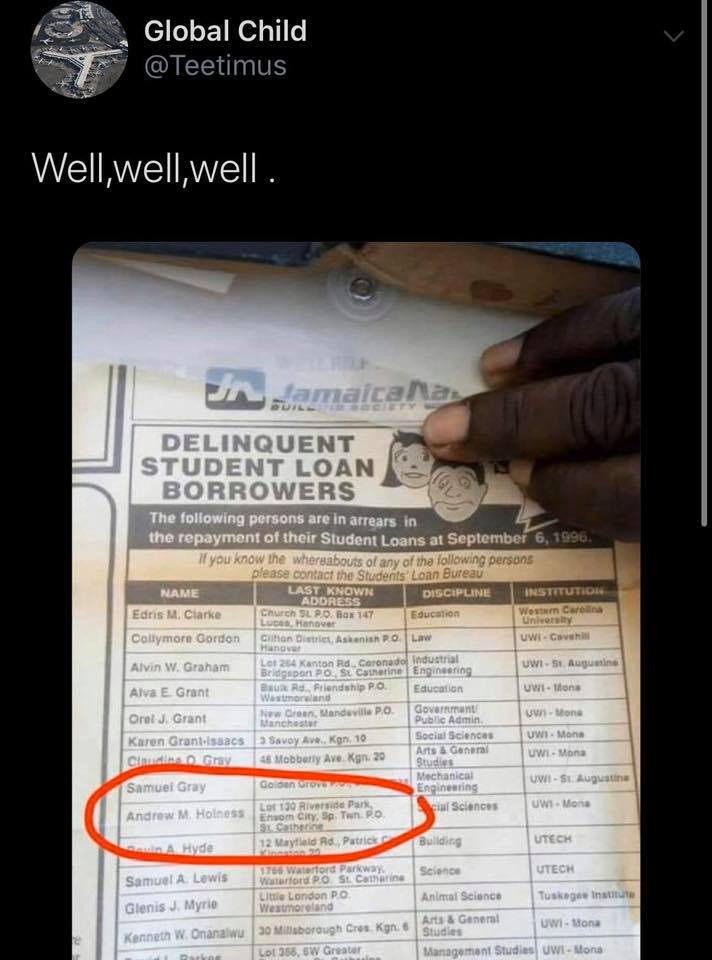 This excerpt is from Loop News. According to the full page newspaper publication from the Students’ Loan Bureau (SLB), under the caption ‘Delinquent Student Loan Borrowers: “The following persons are in arrears in the repayment of their student loans at September 6, 1996”. Holness, now 47, would have been 24 years old at the time and about a year from making his entry into the House of Representatives, which he did when he won the West Central St Andrew seat in the 1997 general election. Holness’ name is circled in red and his then Eltham City, Spanish Town address - his mother’s home - is listed, as well as the fact that he was pursuing studies in the social sciences.

While it is not known whether it is the prime minister’s supporters or his perceived ‘political enemies’ who made the post, what is certain is that his supporters on social media are pointing their fingers at his so-called enemies, while lauding Holness for rising from difficult circumstances. “I had a good laugh when I saw it posted with the intention to ‘shame’ the PM. Pity the poor fools,” said a post from Carlene Ramsay. “Love this,” said Shirley Matthews. For his part, Isaac Morrison said “The pain pee (PNP) think they hurting him but in fact they helping him”. “Big up Brogod you know the people pain,” Ray Williams added.

In his own post, Government Senator and Parliamentary Secretary, Robert Morgan stated, among other things, that this was proof that “every ghetto yute can be great’; “from nothing to something,” and “from board house to Jamaica House”. Holness has often told the story about his humble beginnings, including living in a board house at what would be considered a tenement yard in Spanish Town, St Catherine. He attended the nearby St Catherine High School and was spotted by the late former Prime Minister Edward Seaga in the mid-1990s doing volunteer work and was introduced to politics. The rest, as they say, is history. It ends here.

Now the Prime Minister has been on a path to attempt to secure the votes of the younger crowd and I definitely think this makes him more relatable. He truly rose from nothing to something and has become such an inspiration for many. Some have been begging him to release artiste Vybz Kartel from prison in time for Christmas to secure votes but from where I stand it seems the Prime Minister has the election locked and he could very well easily walk away the victor.

What do you think about this viral post about Brogad Andrew Holness? How would you feel if you were in his shoes?

Reply Jeng
9:04 PM on December 12, 2019
Andrew has done nothing but try to make Jamaica a better place for all not just the rich.

Reply Ramon
7:05 PM on December 12, 2019
I respect this man so much. Although I am not in ja I Believe he is the best person for the job of prime Minister.

Reply Tequilla
5:55 PM on December 12, 2019
Why are people like this? Bringing up such a low point in the man's life in an attempt to make him a laughing stock. Kmt. It is always your own people. Isn't he doing a good job running the country? Aren't things getting better? And we cannot blame him for the violence because him anuh gun man.

Reply Grace
5:32 PM on December 12, 2019
I am so proud of our PM. He has served us well and he has done great things. He has my vote and he will always have my vote because he is a man of the people.

Reply shae
10:43 AM on December 12, 2019
The person who stated that Andrew has done nothing for education obviously isn't paying attention. This man has lowered costs all around and had a huge impact on the education system and its policies. Not to mention what he did in the workforce. So many of us can thank him for the increase we see on our pay stubs.

Reply Lexy Mc
6:45 PM on December 11, 2019
Pity they don't know what doesn't kill you makes you stronger. They tried to bring him down and failed. They only made him look better to people especially those who didn't know about his humble beginnings

Reply Nick
6:18 PM on December 11, 2019
up mi G from nothing to something . I would not let this get me down at all. It just shows my perseverance and strength. Just brush it off and come again

Reply Kayla
4:29 PM on December 11, 2019
Andrew is no doubt one of the best PM Jamaica has ever had. The tax break thing gave a lot of people more control over their pay and allowed them to stop living paycheck to paycheck as they took home more of their salary. That was very huge and it shows he really cares about people

Reply Mr Readalot
2:20 PM on December 11, 2019
This means he is a regular Jamaican. Prime Minister Andrew Holness has shown Jamaicans time and time again that he is connected to the people and he is no novice to struggle.

Reply Lorna
1:25 PM on December 11, 2019
Even the forever president Barack Obama struggled with student loans and he is now a legend for how well he ran America. SO this is nothing. Nothing to be embarrassed about. Big up Andrew!

Reply Shawna
1:16 PM on December 11, 2019
Sometimes no matter what you do people can never be satisfied. Andrew has definitely had a huge impact on tuition fees with having them lowered significantly and he has also implemented programs which will offer aide to students

Reply S.H
1:14 PM on December 11, 2019
A lot of people want to look down on him because of where he came from but it is a true inspiration to ghetto yutes. We dont all have to come from rich backgrounds and have gold spoon in our mouth to reach the pinnacle of success

Reply k
12:17 PM on December 11, 2019
And he doesnt seem to be doing any better these days. Our economy is in shambles and it is not getting any better and chances are he will win the election and things will continue to go downhill. something needs to happen. some big change for Jamaica because we deserve a first world status

Reply Tony
12:14 PM on December 11, 2019
And still the prime minister hasn't made any sort of effort to attempt to lessen the trials for students who are not well off financially. Make boarding free. or food or books free. but no nothing
12Next »