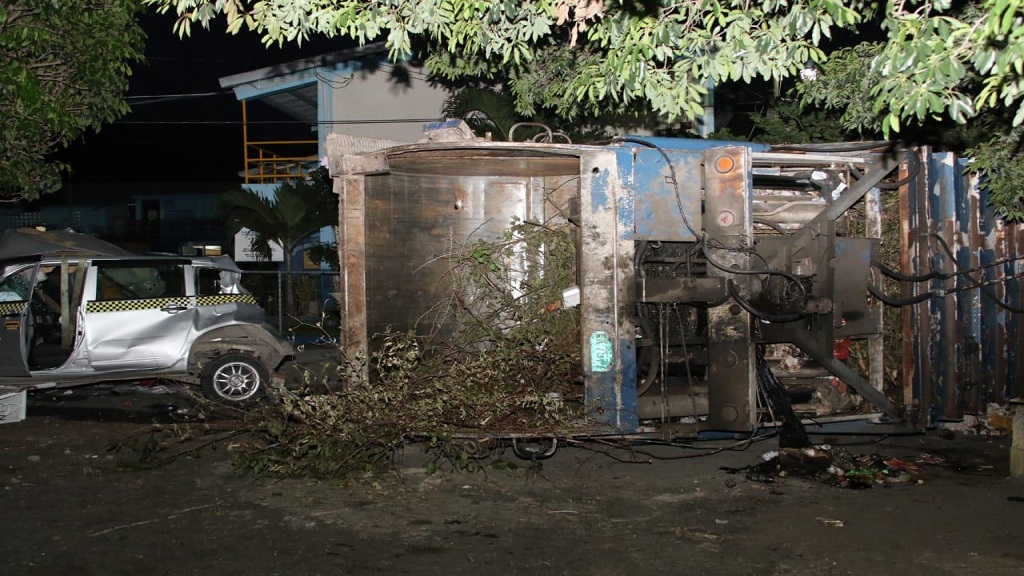 On Monday, October 28th devastation struck at the Clan Carthy Primary School in Kingston. A garbage truck doing collection on the school grounds at about 4:30 pm was left unattended which resulted in it running off and slamming into a wall before overturning and crushing seven-year-old Clan Carthy Primary School student, Benjamin Bair. Sadly Benjamin was killed on the spot and two other students were injured. A Toyota Probox motorcar was also crushed by the impact of the garbage truck falling over. The incident caused shock and anger nationwide. Authorities spent hours into the evening trying to lift the truck with the use of a crane and other heavy-duty equipment.

The driver of the truck fled the scene after the incident and police were unable to identify him. Shortly after, the National Solid Waste Management Authority (NSWMA) issued a statement expressing their grief over the freak incident. The NSWMA stated that it is “deeply saddened by this tragic accident. Our thoughts, deepest sympathy and prayers are extended to the parents, members of the school community, and friends of the deceased.” They noted that the garbage truck “is not owned by or currently contracted to the NSWMA. However, our Senior Team at MPM Waste Management Limited have been dispatched since the incident, and are on location offering moral support.” Executive Director of the NSWMA, Audley Gordon stated: “I am deeply saddened by this news. I know it’s a very painful and difficult time for the family and school community, and I want to convey sincere sympathies and condolences to them.”

Many school personnel and students along with parents were stricken with grief. Teachers of the institution openly displayed their pain and the principal fought hard to hold back his tears but he was unable to. Minister with responsibility for education, Karl Samuda, Opposition Leader, Dr. Peter Phillips, and South East St Andrew MP, Julian Robinson visited the school to offer their condolences and support after the tragic incident.

Reports from the Elletson Road police in Kingston are that on Friday, November 1, at about 6.30 pm, the driver of the truck turned himself into police. He is Alten Brooks, 52, of Nine Miles, Bull Bay, St Andrew. He has now subsequently been charged with manslaughter. He is slated to appear in the Kingston and St Andrew Parish Court on Friday, November 15.

My heart goes out to the family, friends, and teachers of Benjamin. I cannot imagine the pain they are going through as I have small children of my own. It must be unbearable. In the case of the driver, he should not have fled the scene after the incident, Yes he must have been terrified and scared due to the gravity of the situation at hand but a child was killed due to his negligence. Why did he leave the truck unattended? And the school authorities must be held accountable as well. How did this happen? Why was a truck allowed on school ground while children were present? Why were there no teachers supervising the children to ensure that they were not allowed anywhere close to the truck if it had to be on the ground at those hours?

There are so many questions that I have that I need to have answered. I am enraged! I hope this isn't something that we merely push under the rug as a country. We need to look into all sides of this including the NSWMA. If it isn't their truck then whose is it? Who gets held accountable for everything leading up to this incident? And the driver should definitely be given a life sentence for not only killing that little boy but for fleeing the scene.

What are your thoughts on this tragic incident?

Reply Kayla
10:01 PM on November 21, 2019
heartbreaking event so so sad this man should never see the light of day ever again

Reply Jeng
9:54 PM on November 21, 2019
rip little man. gone so soon nuh reach nowhere yet and his life just snatched away like that

Reply Ms Kitty
9:50 PM on November 21, 2019
Is there any followup to this story? I really want to know what happens to this man. While we have to be thankful that he turned himself in he did flee the scene and he is completely responsible for leaving the truck running

Reply shae
9:49 PM on November 21, 2019
condolences to the little boy's family and friends and the teachers . i have a son and he just started school i dont even want to think that way

Reply Mr Readalot
9:16 PM on November 21, 2019
Why did it take so long for him to turn himself in? It was a tragic terrible mistake

Reply Lexy Mc
9:14 PM on November 21, 2019
This man should receive the death penalty if we had it. this is unimaginable

Reply Grace
9:12 PM on November 21, 2019
things like this remind me how much evil is in the world. it really makes you question your faith

Reply Ramon
9:12 PM on November 21, 2019
i really dont know what I would do in this case. when i watched the video it was gut wrenching seeing the parents and teachers just bawling idk man it hard

Reply Tequilla
9:04 PM on November 21, 2019
can you imagine the shock the parents get when they go to the school to pick up their 7 year old son only to hear that hes dead like wtf how do you deal how do u not just lose your mind. rip

Reply Nadine
8:42 PM on November 21, 2019
I am in tears this is so sad. I hate hearing of stories like these. this poor innocent child

Reply Lorna
8:41 PM on November 21, 2019
so there are private garbage collection trucks in ja? this story is crazy and something isn't adding up

Reply Ray
8:40 PM on November 21, 2019
The garbage collection agency defintely has to pay some penance for this incident

Reply Shawna
8:29 PM on November 21, 2019
although it was an accident and the principal feels heartbroken over it he needs to be placed on some type of suspension because his negligence caused this to happen

Reply TJ
8:28 PM on November 21, 2019
What a man wicked. How do you accidentally kill a child and then leave him like that . you have to have a cold heart

Reply Tami
8:28 PM on November 21, 2019
oh gosh I can just think how that man must have felt. just seconds of leaving the truck alone and a life is lost

Reply k
8:11 PM on November 21, 2019
oh my god this is a deep one if I were the parents I would sue the school, the garbage company and the dutty man

Reply Lacky
8:01 PM on November 21, 2019
condolences to the family of that sweet little boy. such a tragic loss

Reply Nick
8:00 PM on November 21, 2019
This goes to show inadequate safety training and inadequate manpower. Something like this should have been prevented.

Reply S. H
7:58 PM on November 21, 2019
this man is the most hated man in jamaica now and rightly so. what kinda man walks away from a crime scene. it was unintentional wasn't it

Reply Sabrina
7:18 PM on November 21, 2019
I have no words. This is one of the most painful things I have ever read. How does something like this happen?